Christianity is not all that popular in Japan.  Apparently less than half a percent claim membership.  But Christian iconography is popular (which you would know if you watch Evangelion), so it’s no wonder that when making a sexy, violent exploitation movie, they’d pick a convent as the perfect setting.

School of the Holy Beast is about a new nun named Maya.  She was born in the Sacred Heart Convent, but never knew her mother or father.  When she grows up, she joins the nunnery hoping to unravel the mystery of her birth.

Turns out the church is rife with nun-lusting priests and institutional cover-ups. It must have seemed outrageous at the time; but with hindsight, we know that it’s a pretty tame representation of what was actually going on in the church in the ’70s.

As Maya says in the opening of the film, a convent is, ‘where women aren’t women,’ and that’s becomes a constant theme in the movie.  The idea that sexuality is normal, and that suppressing it is not only abnormal, but impossible, and hypocritical (as the priests and nuns who enforce the rules are the most egregious in breaking them).

Of course, School of the Holy Beast isn’t out to make social commentary.  It’s a nunsploitaion movie.  Everything scene has a veneer of sexuality over it.  When the nuns are punished, they’re topless, when they’re initiated, they’re topless; the movie never forgets what it’s there for.

And yet, you can’t help but think that this is a more accurate portrait of convent life than you normally see in movies.  If not outwardly, perhaps as a glimpse of the burning hormonal desires that rage under the surface.  Sacred Heart Convent is what a convent would look like if the nuns were allowed to be honest, and express their humanity; to be women, as Maya said.

The film was produced by the movie studio Toei, which is famous for their classic samurai movies, like Lone Wolf and Cub, and Lady Snowblood. School of the Holy Beast shares a lot of visual characteristics with it’s samurai siblings; the bright red fake blood, the topless nuns in bondage, the giant ‘end’ kanji to finish the movie, etc.

And it’s beautifully shot.  It looks like it was filmed in an actual church and the camera work shows some artistry.  One scene in particular has a nun chained to a chair.  The other nuns surround her and begin whipping her with bouquets of roses.  The petals fly off, as bright-red blood sprinkles her body, all in slow motion.  Okay, it’s not a ‘nice’ scene, but it looks good. 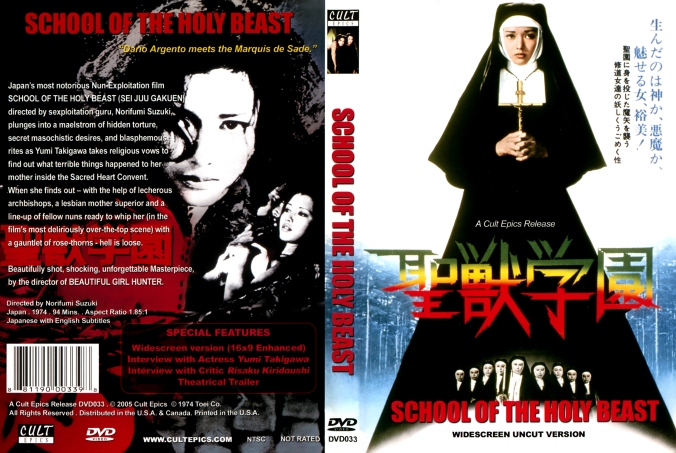