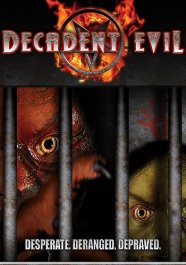 The official run time of Decadent Evil is 67 minutes, but the end credits start at the 59 minute mark.  Add to that two or three minute long opening credits and the seven or eight minutes of reused footage from an earlier movie called Vampire Journals, and you’re not left with much time to develop anything of great depth.

A red dressed woman named Morella leads a vampire clan consisting of two subordinate vampire girls who work as strippers.  They’re named Sugar and Spyce (with a ‘y’).  There is some kind of vampire legend that says if a vampire can kill 10,000 people and ingest their souls, they will become a super-vampire with invincibility and the power  to control other vampires.  Soon after the start of the film, Morella needs just three more.

Morella used to be in love with a human, but he cheated on her, so she turned him into a homunclous, which she explains is a prehistoric half-man/half-reptile (though I only have a layman’s knowledge of evolutionary theory, I’m pretty sure that doesn’t represent a part of our history).  For a character with such a prominent role, the puppet they made for him is rather cheap and unconvincing, which makes it hard to sympathize with him later on.

Her failed relationships of the past have made her bitter, so Morella is upset to learn that Sugar has fallen for a young human man and orders her to call it off.  Morella is hard to understand.  If she were simply evil and power-mad, why not force Sugar to bring her boyfriend to the house to be the next victim?  It’s like she wants to protect Sugar’s feelings, but that’s not trait worthy of an evil vampire.  But then, no one’s motivations in the movie are considered that deeply, everyone seems to be moved by base emotions, instinct, or the needs of the plot.

Into this mix comes Ivan, played by Phil Fondacaro, a vampire hunter who shares a past with Morella.

I don’t have anything particularly bad to say about the movie.  The acting is fine, the plot is serviceable.  But the fact that it’s only about 50 minutes long prevents anything from being developed.  The characters aren’t so much people as they are tools to move the plot forward.

Ivan wants revenge, Morella wants power, Spyce (I’m not sure what she wants), and Dex and Sugar are in love.  That’s all we really learn about any of the cast.  And we don’t even learn it so much as we are simply told it.  We never really see anyone being ‘human’ and thus, we never connect with any of them.

Once again, director Charles Band has produced a competent but undistinguished effort.  There’s a few neat twists to the vampire genre, but a short run time and pervasive shallowness keep Decadent Evil from ever becoming special.